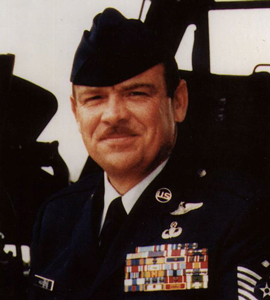 Duane Hackney, of Trout Run, Pennsylvania, was born in Flint, Michigan on June 5, 1947. He graduated from Flint Beecher High School where he was president of the student council. Duane joined the Air Force in 1965 and served as a pararescue recovery technician. Hackney was an honor graduate for the Pararescue Specialist School, medical training, scuba training, Combat Survival School, Army Ranger School. His other courses were for security police, NCO leadership and attended Lycoming College in Williamsport. Duane flew 200 missions in Vietnam during two tours 1966-1967 and 1970-1971. Hackney’s helicopter was shot down five times during a two-month period in 1966.

Heroism seems to have run in Duane’s immediate family,” said Robert L. LaPointe, a former PJ. “His father won the Silver Star and Purple Heart in World War II. He had kicked a Japanese grenade out of a foxhole and jumped on three soldiers to protect them from the blast.

He became the youngest person and fourth enlisted to be awarded the Air Force Cross, the Nation’s second highest honor for giving up his own parachute and risking his life on February 6, 1967. Duane’s combat tour ended in October of 1967 and assigned to Hamilton Air Force Base in California. Hackney Duane appeared on the “Tonight Show”, Ed Sullivan, Art Linkletter and Joey Bishop shows, with “Hackney Day” held in Detroit, Michigan. He escaped a fatal wound when a bullet entered the front of his helmet and exited the back during a rescue mission in Vietnam on April 9, 1971. Duane was discharged in 1973 and reentered the Air Force in 1977. Chief Master Sgt. Hackney retired from the Air Force on June 30, 1991 and had been awarded 28 decorations for valor in combat and more than 70 awards in all, becoming the most decorated enlisted man in Air Force history. He earned four distinguished flying crosses, 18 Air Medals, Silver Star Medal, Airman’s Medal, two Purple Hearts, two Meritorious Service Medals and the Air Force Commendation Medal. Other accomplishments for Duane included the Combat Readiness Medal, Master Parachutist Badge, Outstanding Airman of the Year Ribbon, 1967 Military Airlift Command Airman of the Year, 1968 “Cheney Award” given for an act of valor, 1987 8th Air Force First Sergeant of the Year, posthumously a 2009 Michigan Aviation Hall of Fame inductee, Hackney Training Complex dedicated at Lackland AFB in 2013. Hackney was a member of the Grace United Methodist Church in Flint, Master Mason in the Mt. Morris Lodge #535, American Legion Post #64 in Flint and a Genesee County Sheriff Deputy in Flint, with hobbies of canoeing, hiking and boating. Duane died in Williamsport on September 3, 1993 at the age of 46.

When I arrived in Vietnam in 1971, Duane and others had set high standards for us to follow.“When one reads the facts concerning Duane’s actions on the day, he earned the Air Force Cross, many would call his survival miraculous. Some claimed it was instinctive, the result of intensive training. Regardless of how Duane survived, he became an Air Force legend. Being a legend after the Vietnam War was not an easy task. When asked about his Air Force Cross, Duane often stated, ‘I was just doing my job. Anyone else in my situation would have done the same.’ 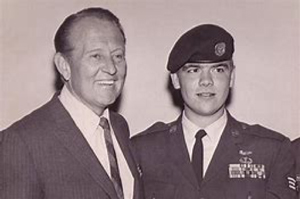 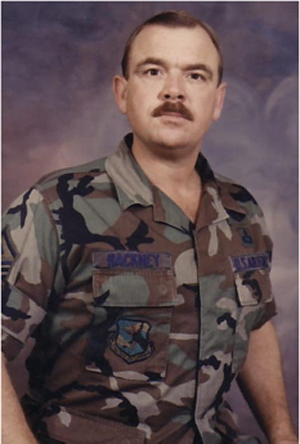 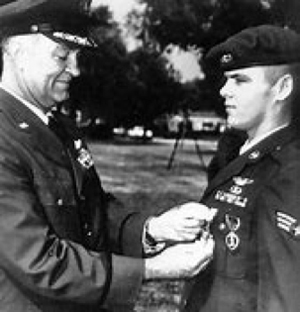