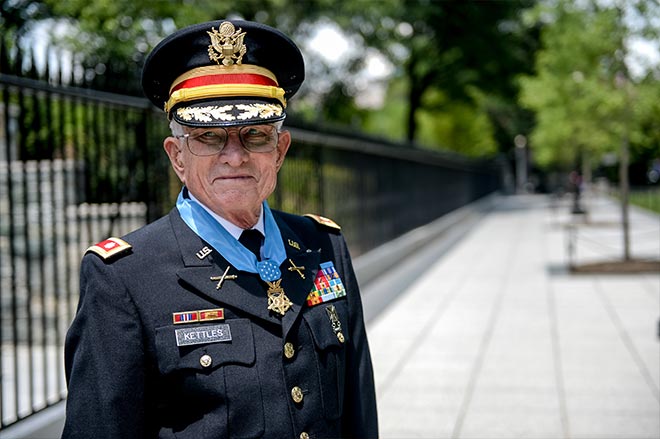 LTC Charles Kettles exemplified the best of American values - courage, dedication, and selflessness. He went above and beyond the call of duty to save the lives of his fellow soldiers, and it was a true honor to ensure he was properly honored as one of our nation's bravest heroes.

Kettles was drafted and completed basic combat training at Camp Breckenridge, Kentucky in 1951, Officer Candidate School at Fort Knox, Kentucky in 1953 and the Army Aviation School in 1954. His other courses included helicopter transition training at Fort Walters, Texas in 1964 and UH-1D “Huey” multipurpose utility helicopter training during a tour of duty in France. Charlie served as the Aviation Team Chief and Readiness Coordinator at Fort Sam Houston in San Antonio.

Other assignments for Kettles included South Korea, Japan, Thailand, Army Reserve 4th Battalion, 20th Field Artillery and in France. Lt. Col. Kettles retired from the Army in 1978 and had been awarded the Legion of Merit, Distinguished Flying Cross, two Bronze Star Medals, 27 Air Medals and two Army Commendation Medals. President Barrack Obama awarded the Medal of Honor to Kettles on July 18, 2016 in a ceremony at the White House. The Nation’s highest honor was bestowed some 50 years after his actions as flight commander, 176th Assault Helicopter Company, deployed to Vietnam 1969-1970, led a flight of six UH-1D helicopters to bring reinforcements and rescue the 1st Brigade, 101st Airborne Division ambushed in the Song Tra Cau riverbed. Charlie served as professor of the Aviation Management Program he developed at Eastern Michigan University. Kettles established a Ford dealership in Dewitt, Michigan and worked for Chrysler Pentastar Aviation. He died on January 21, 2019 at the age of 89. 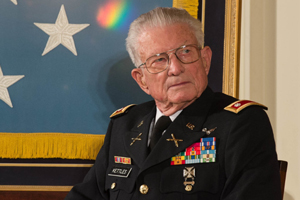 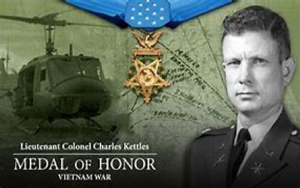 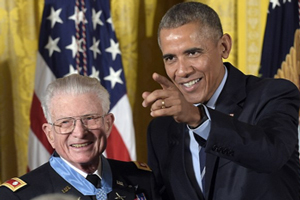