Gerald R. Ford was born in Omaha, Nebraska in 1913. He earned a BA degree from the University of Michigan in 1935 and an LL.B. from Yale Law School in 1941. Ford played for the 1932 and 1933 Wolver-ines National Championship football teams, later declining offers from NFL teams. He enlisted in the Navy following the Pearl Harbor attack, serving in the light aircraft carrier USS Monterey (1943-44), at Naval Air Station Glenview, Illinois (1945-46), and with Naval Reserve (1946-63). He represented Michigan’s 5th Congressional district 1949-1973 and was elected House Minority Leader in 1965. The Senate confirmed Ford to become the 40th Vice President upon Spiro Agnew’s resignation. He became the 38th President in 1974, when Richard Nixon resigned. Ford established the Gerald R. Ford Institute for Public Policy at Albion College in 1977. He opened the Gerald R Ford Library at the University of Michigan and the Gerald R Ford Presidential Museum in Grand Rapids, in 1981. The aircraft carrier USS Gerald R. Ford was named for him. He died in 2006 at age 93. 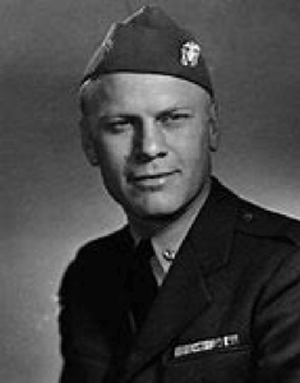 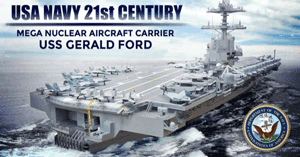