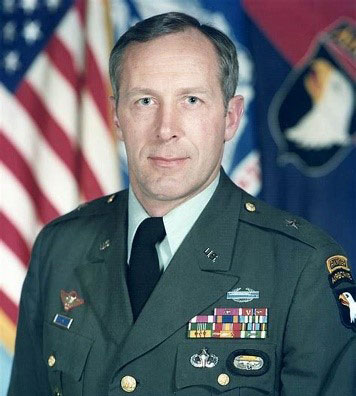 Pete Dawkins was born in Royal Oak in 1938. Overcoming polio as a youth, he was accepted at Yale but chose to enter the US Military Academy. While at West Point, he became the third Black Knight to win the Heisman Trophy while leading Army’s football team to an undefeated season in 1958. He remains the only cadet to serve as Brigade Commander, President of his Class, Captain of the football team, and in the top 5% of his class academically. After graduating in 1959, Dawkins earned a Rhodes Scholarship to Oxford. Field assignments included a combat tour in Vietnam with the 82nd Airborne Division, the 2nd Infantry Division, the 7th Infantry Division and the 101st Airborne Division (Air Assault). Pete earned both a Master’s Degree and Ph.D. from Princeton, and served as a White House Fellow and Military Assistant to the Secretary of Defense. He was promoted to Brigadier General in 1981 and assigned to the Office of the Chief of Staff of the Army. His final assignment was as the Deputy Director for the Strategy, Plans, and Policy Directorate. General Dawkins retired in 1983 after 24 years of distinguished service.