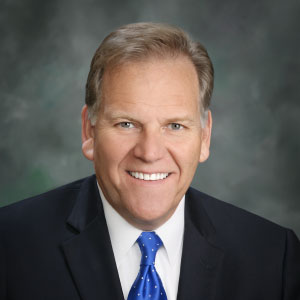 Mike Rogers was born in Howell in 1963. He earned a Bachelor’s degree in Criminal Justice and Sociology from Adrian College in 1985. He was commissioned as a Second Lieutenant in the Army the same year and served with the 7th Infantry Divisions at Fort Ord, California. Upon completion of military service, Rogers became an FBI Special Agent in Chicago. In 1995, he was elected to the Michigan Senate, representing the 26th District and served as the Senate Majority Floor Leader. In 2000, Rogers was elected to represent Michigan’s 8th Congressional District. While serving in the US House of Representatives (2001-2015), Mike chaired House Permanent Select Committee on Intelligence (HPSCI) and was a member of the Energy and Commerce Pan-el. As chair of HPSCI, he oversaw a budget of $70 billion that provided funding to the nation’s 17 intelligence agencies. Rogers became a prominent leader on cybersecurity in the US Congress during his service and is a highly sought-after national expert on cyber policy.