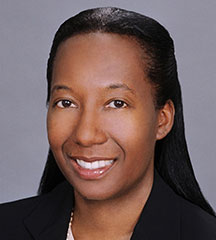 Kathy White entered the US Army Reserve in 1988 as a law student. Her military service has spanned more than three decades. Assign-ments include service as a Professor, Associate Dean, and Deputy Commander of the Judge Advocate General’s School. She also served as an Assistant Professor, United States Military Academy at West Point, as the Deputy Staff Judge Advocate and later as the Staff Judge Advocate for the 46th Military Police Command. White became the first female African American general officer in the Michigan Army National Guard, and currently serves as Deputy Commanding General of the 46th Military Police Command in Lansing. Her civilian legal career includes service as the Judicial Law Clerk, U.S. Court of Appeals for the Federal Circuit, as a Fulbright Senior Scholar, White House Fellow, and as Special Counsel to the US Secretary of Agriculture. General White also serves as a Member of the University of Michigan Board of Regents, and as Professor of Law at Wayne State University Law School.