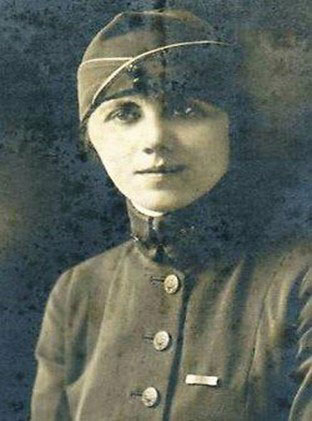 Oleda Joure-Christides was born in 1897, in Marine City, and served as a telephone operator in the US Army Signal Corps’ famed “Telephone Girls” Brigade in World War I. When the US entered the war in 1917, American Expeditionary Forces (AEF) Commander General John Pershing recognized that expert telephone communications and technology support between command units and the front lines would be crucial to victory. To fill this need, the call went out to all civilian telephone operators in the US, overwhelmingly female, to join the Army Signal Corps. Hundreds of female operators throughout the country responded, including 19-year-old Joure-Christides. She enlisted in 1918, leaving hometown, family, and career as Chief Bell Telephone Operator in Marine City. She served near the front lines at AEF Headquarters in Chaumont, France. Oleda and all female operators performed the same duties as their male Signal Corps comrades.


Upon demobilization in 2019, Joure-Christides returned to Marine City and resumed her civilian career as a telephone operator, married, and raised a family. Despite assurances to the contrary, the Army issued the Telephone Girls Brigade “Service Termination Letters” instead of a military discharge, denying them veteran status and any benefits. Thus began a decades-long fight by Joure-Christides and other Brigade veterans to petition Congress to obtain full military discharges and benefits. These efforts included letter writing campaigns to Congress, First Ladies, and War/Defense Department officials. After decades of struggle, legislation was passed in 1978 to award honorable discharges with benefits to all Telephone Girls Brigade members. In 1978 Joure-Christides was awarded her official discharge at home with her husband Chris by her side.

Oleda passed away in Marine City in 1984.