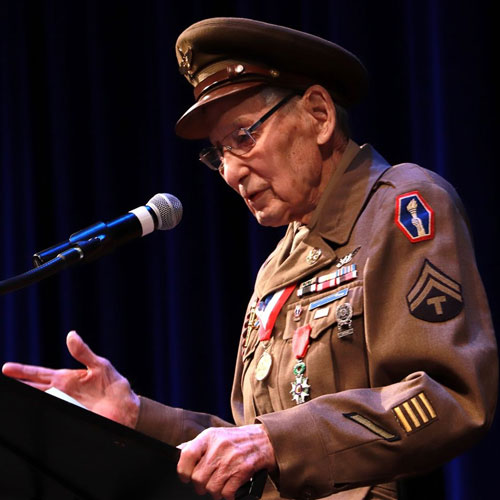 Virgil Nishimura Westdale was born in 1918, near Millersburg, Indiana, to a Caucasian mother and Japanese father. The family moved to White Pigeon, Michigan, in 1927 and subsequently adopted the surname Westdale (the English translation of Nishimura). Virgil obtained his private pilot’s license in 1942 while a student at Western Michigan University, graduating at the top of his class. He subsequently was inducted into the U.S, Army Air Corps Reserve as an Instructor Pilot for Army Air Corps pilot trainees, the only Nisei soldier known to have been assigned in this role.


Several months later, his pilot’s license was confiscated, he was demoted to Private, and was assigned to the 442nd Regimental Combat Team, this action likely the result of Executive Order 9066 (signed by President Roosevelt in 1942), declaring that all individuals with at least 1/16 Japanese ancestry were to be designated as "Enemy Aliens" regardless of their citizenship. Virgil fought with the 442nd Italy and France, and liberated prisoners of the Dachau concentration camp. The 442nd remains the most decorated unit in US military history.

After World War II, Virgil went on to a distinguished civilian career as a chemical engineer, earning twenty-five patents. He retired in 1987 but then took a position as an airport security screener at Gerald R. Ford International Airport in 1995, at age 77, remaining in this position (with the Transportation Security Administration after September 11, 2001) until retiring in 2009 at age 91. In 2004, he was selected from among 40,000 employees as TSA’s Employee of the Year at age 86. Virgil died in 2022 at the age of 104.