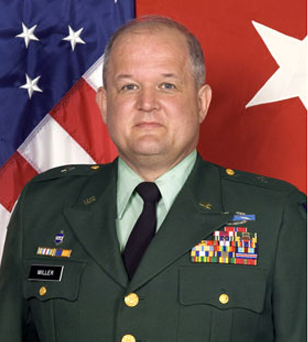 Brigadier General Richard S. Miller (Ret) served as the Deputy Commanding General for the 38th Infantry Division, Indiana National Guard. He received his commission in 1982 as an Infantry Officer and has had numerous command positions. He was deployed to Afghanistan in 2004 and commanded all Embedded Tactical Trainers in Southern Afghanistan located in Kandahar. He also served as the Senior Military Advisor for the 205th Corps Commander of the Afghan National Army. BG Miller is actively involved in Non-profit organizations focusing on Veterans issues. He serves on the Board of Directors of the National Veterans Business Development Council. Also serves on the board of directors of the Michigan Military Veterans Hall of Honor and is the State President for the Association of the United States Army for Michigan. He participates as an advisor for the Computer Technology school of Ball State University. He also works with the Eisenhower Center of Ann Arbor to support a veteran treatment center located at Selfridge Air Force Base. The center treats veterans experiencing PTSD and traumatic brain injuries. In his civilian life, he is the Chief Operations Officer (COO) for a Technology Video Telematics company in Troy Michigan.