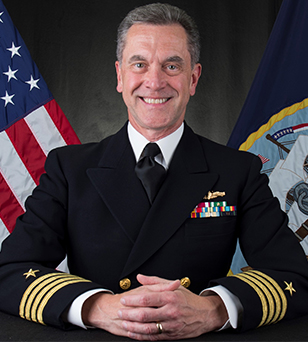 Paul J. Ryan, of Jenison, Michigan, was born in Brooklyn, New York. He graduated (with honors) from the University of Notre Dame and was commissioned an Ensign, United States Navy, through Notre Dame’s Navy ROTC program in 1975. Paul served on active duty for five years and made one peacetime deployment to the Western Pacific on a destroyer. He was designated a Surface Warfare Officer in 1977. Paul’s subsequent service in the Navy Reserve spanned twenty-five years, including seven tours as Commanding Officer of various Navy Reserve units. He retired from the Navy in 2005 with the rank of Captain. His decorations include the Meritorious Service Medal, the Navy and Marine Corps Commendation Medal (two awards) and various service awards.

Paul pursued a “parallel” civilian career in banking, estate planning and fiduciary services since leaving active duty, with Fifth Third Bank in Grand Rapids and its predecessor, Old Kent Bank. He maintained a Certified Financial Planner designation and his assignments included service to a wide variety of individual and institutional clients as well as management roles. Paul retired in 2018, as a Vice President, after 37 years of service.

Paul joined the Michigan Committee for Employer Support of the Guard and Reserve (“ESGR”) in April 2001. ESGR is a volunteer organization sponsored by the Department of Defense whose mission is to work with employers – and service members – to help create a culture in which military service is valued by every civilian employer in the United States. Paul served in a variety of positions during his 18 years with ESGR, including State Chair for Michigan (2008-2014). For his service as State Chair he received the Office of the Secretary of Defense Medal for Exceptional Public Service. In addition to his work with ESGR, Paul is active in a wide variety of volunteer organizations supporting military families and veterans, including the Military Officers Association of America, the United Veterans Council of Kent County and the West Michigan Veterans Coalition. Additionally, Paul has been recognized by the United States Navy Recruiting District-Michigan and the United States Marine Corps for his volunteer efforts in support of those organizations.

Paul is married to Lauralee Mathieu and has three children and three grandchildren. His older son, Timothy, serves on active duty with the Navy as an Ensign in the Civil Engineer Corps.