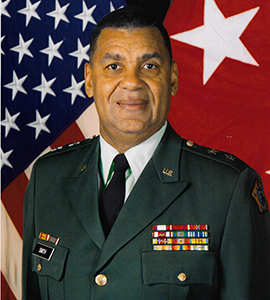 Robert W. Smith III of West Bloomfield, Michigan, retired from the U.S. Army with the rank of Major General. Smith was awarded the Distinguished Service Medal, Legion of Merit, two Bronze Star Medals and three Meritorious Service Medals during his 34-year Army career. He served as an air defense and infantry officer from the detachment to division levels in key staff positions, with combat service during the Vietnam War. Bob retired from the Ford Motor Company after 32 years as a finance executive. Smith previously served as the Director of the Veterans Services Division, Workforce Development Agency, State of Michigan, and was president of the 75,000-member Reserve Officers Association. He has served on the board of Volunteers of America-Michigan and former Vice Chairman of the Pentagon Federal Credit Union Foundation Board in Arlington, Virginia. Bob is a general partner with Smith and Jones Enterprises, a real estate and financial services firm.