Hall of Honor Endorsement from State of Michigan 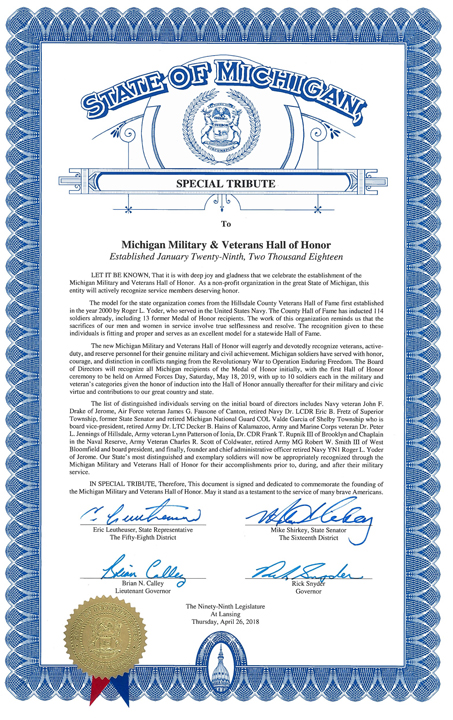 LET IT BE KNOWN, That it is with deep joy and gladness that we celebrate the establishment of the Michigan Military and Veterans Hall of Honor. As a non-profit organization in the great State of Michigan, this entity will actively recognize service members deserving honor.

The model for the state organization comes from the Hillsdale County Veterans Hall of Fame first established in the year 2000 by Roger L. Yoder, who served in the United States Navy. The County Hall of Fame has inducted 114 soldiers already, including 13 former Medal of Honor recipients. The work of this organization reminds us that the sacrifices of our men and women in service involve true selflessness and resolve. The recognition given to these individuals is fitting and proper and serves as an excellent model for a statewide Hall of Fame.

The new Michigan Military and Veterans Hall of Honor will eagerly and devotedly recognize veterans, active­duty, and reserve personnel for their genuine military and civil achievement. Michigan soldiers have served with honor, courage, and distinction in conflicts ranging from the Revolutionary War to Operation Enduring Freedom. The Board of Directors will recognize all Michigan recipients of the Medal of Honor initially, with the first Hall of Honor ceremony to be held on Armed Forces Day, Saturday, May 18, 2019, with up to 10 soldiers each in the military and veteran's categories given the honor of induction into the Hall of Honor annually thereafter for their military and civic virtue and contributions to our great country and state.

IN SPECIAL TRIBUTE, Therefore, This document is signed and dedicated to commemorate the founding of the Michigan Military and Veterans Hall of Honor. May it stand as a testament to the service of many brave Americans.