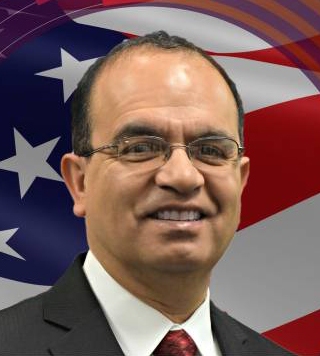 Valde Garcia of Farmington Hills, Michigan, retired from the Army with the rank of Colonel. Garcia's military career spanned 30 years (active duty from 1981-1990; Army Reserve 1990-1999 including being mobilized in support of Operation Desert Storm; and the Michigan Army National Guard 1999-2011). While on active duty, he served in infantry, armor, and air defense artillery units. He served as the Michigan National Guard's Deputy Chief of Staff for Intelligence and Security and graduated from the Army War College in 2010. Valde served in the Michigan House of Representatives 1999-2001, and in the Michigan Senate 2001-2010. Garcia served on the Senate Senior Citizens and Veterans Affairs Committee and presided as Chairman of the State Police and Military and Veterans Affairs Appropriations subcommittee. He was appointed by President Bush to serve on the White House Fellows Commission, and the Federal Home Loan Bank Board of Indianapolis. Valde has worked in the defense industry and is currently the Congressional & Industry Liaison for the Program Executive Office Combat Support & Combat Service Support, United States Army at the Detroit Arsenal, Warren, Michigan.